According to a survey published last month, three out of every four Americans think a nuclear, chemical, or biological attack is likely to take place somewhere in the world in the next 12 months.

In the unlikely scenario of a nuclear attack on America – an all-out nuclear war – very few places would be safe, though no doubt less populated, remote areas would be safer. An enemy nation would first aim to neutralize the U.S. nuclear capabilities by targeting strategic military installations, many of which are near large urban centers.

Stephen Schwartz, author of “Atomic Audit: The Costs and Consequences of US Nuclear Weapons Since 1940,” identified 15 such targets. The targets, mapped by Business Insider, include command centers, ICBM bases, communication stations, and air force and submarine bases. In addition, Dr. Irwin Redlener, a professor at Columbia University’s Mailman School of Public Health, identified six economic centers most likely to be attacked.

To find the worst places to be if there’s a nuclear attack on America, 24/7 Wall St. constructed an index consisting of several measures to rank major U.S. cities likely to be targets based on both Schwartz’s and Redlener’s lists. The measures in the index include population density; city preparedness for emergency; economic significance; city preparedness plans; distance to the strategic military target; proximity to nuclear power plants; and ease of evacuation based on commute time as a proxy to congestion and the percentage of a city area that is water. We also added projected fatalities and injuries assuming a 1 megaton bomb, using Nukemap.

It is important to note that the first priority in case of a nuclear explosion is not to evacuate but to “get inside, stay inside, stay tuned,” according to Ready.gov. FEMA’s plan reiterates the message and asks to stay inside an “adequate shelter in basements or the center of larger, dense buildings” for at least 12-24 hours if possible. It adds, “Stay tuned for public announcements about hazard areas and evacuations.” (Here is what to do before, during, and after a nuclear attack.)

To be sure, the nation’s capital has both a strategic and civilian value, and is therefore one of the most likely targets. Many of the cities on the list may not be the first cities that come to mind as worst to be in case of a nuclear attack, but given the high likelihood they would be hit, at least partially, they make the list. Of course, many more economic centers could be targeted, including Boston, Miami, Atlanta, San Jose, Dallas, and Philadelphia to name a few. (An attack on a nuclear plant would also cause devastation. These two events are the world’s worst nuclear accidents.) 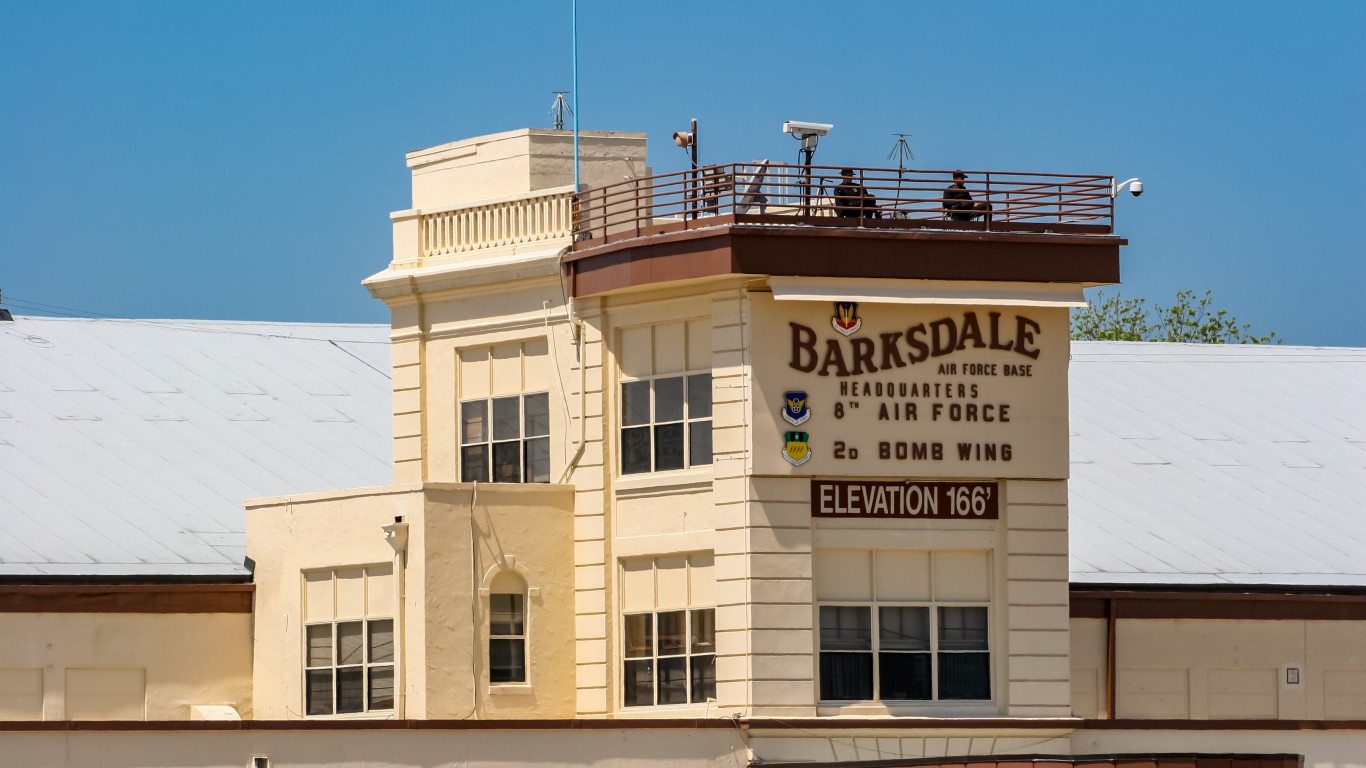 Barksdale Air Force Base, which is within the Shreveport-Bossier metropolitan area east of Bossier city, is home to three squadrons of B-52H Stratofortress bombers, which are capable of flying at high subsonic speeds and can carry nuclear ordnance. The base is also the headquarters of the Air Force Global Strike Command, which is responsible for the nation’s three ICBM wings, and the Air Force Nuclear Command among others. 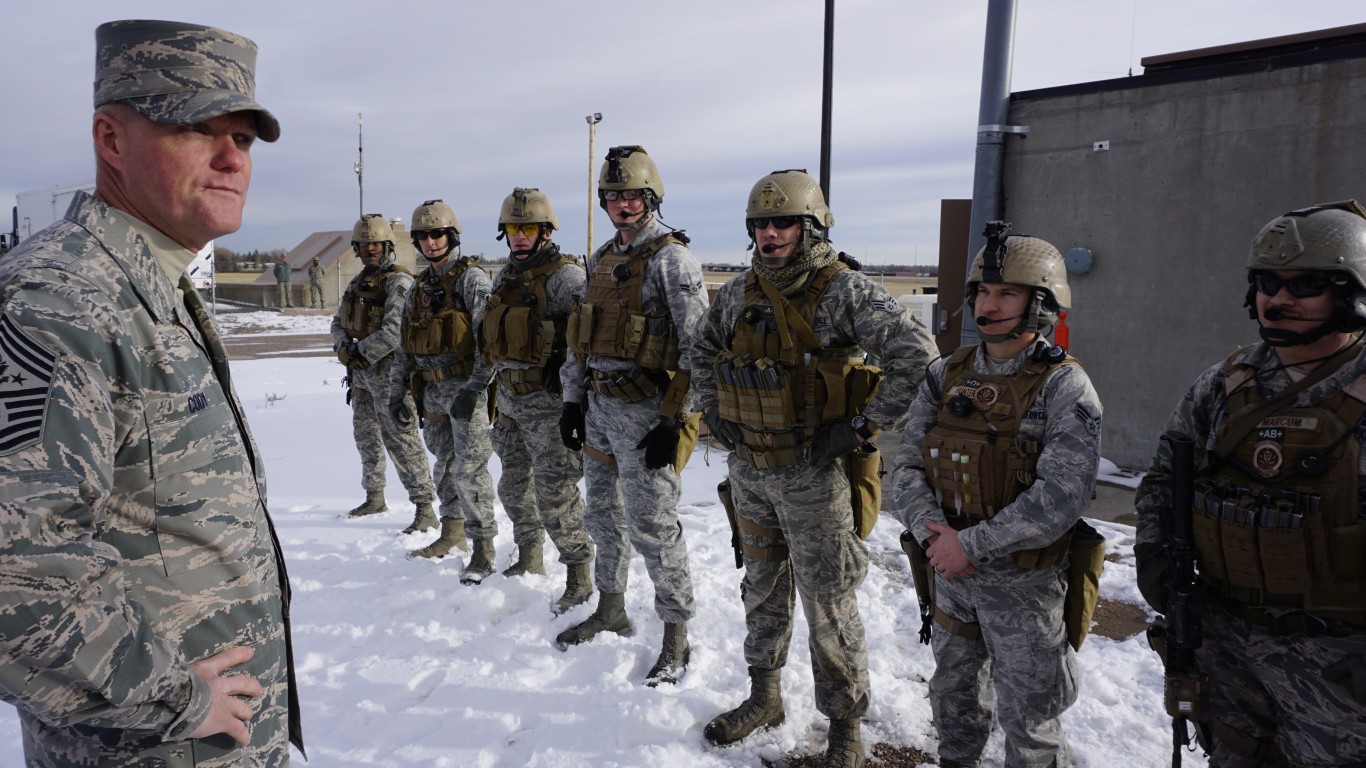 Located just 3 miles west of Cheyenne, Francis E, Warren Air Force base is home to the 90th Missile Wing, a combat-ready ICBM force. In 2020, the Air Force announced it will be replacing the aging LGM-30 Minuteman III ICBMs with the more advanced LGM 35A Sentinel ICBM at the three bases that operate them, including F.E. Warren. 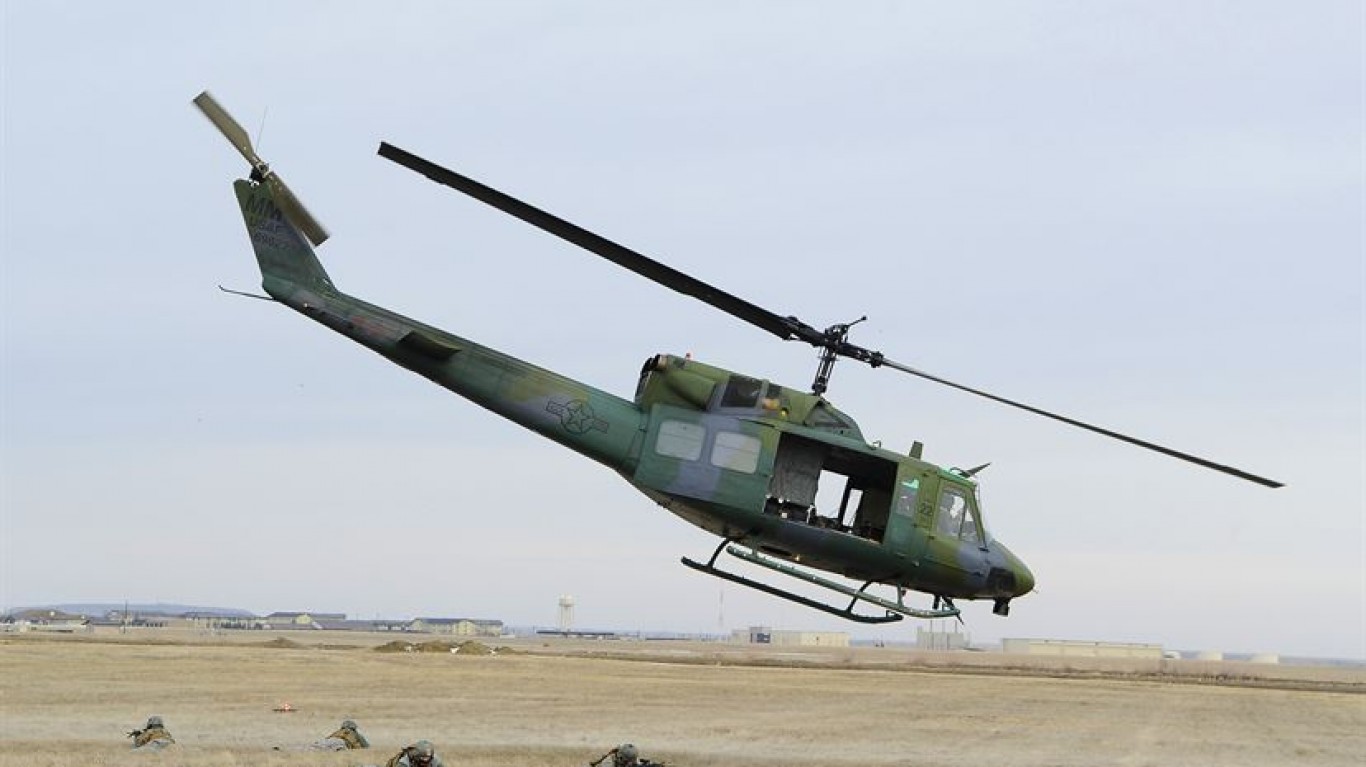 Located east of Great Falls, within 6 miles of the city center, Malmstrom Air Force Base is home to the 341st Missile Wing, one of three that operate, maintain, and secure the Minuteman III ICBM. 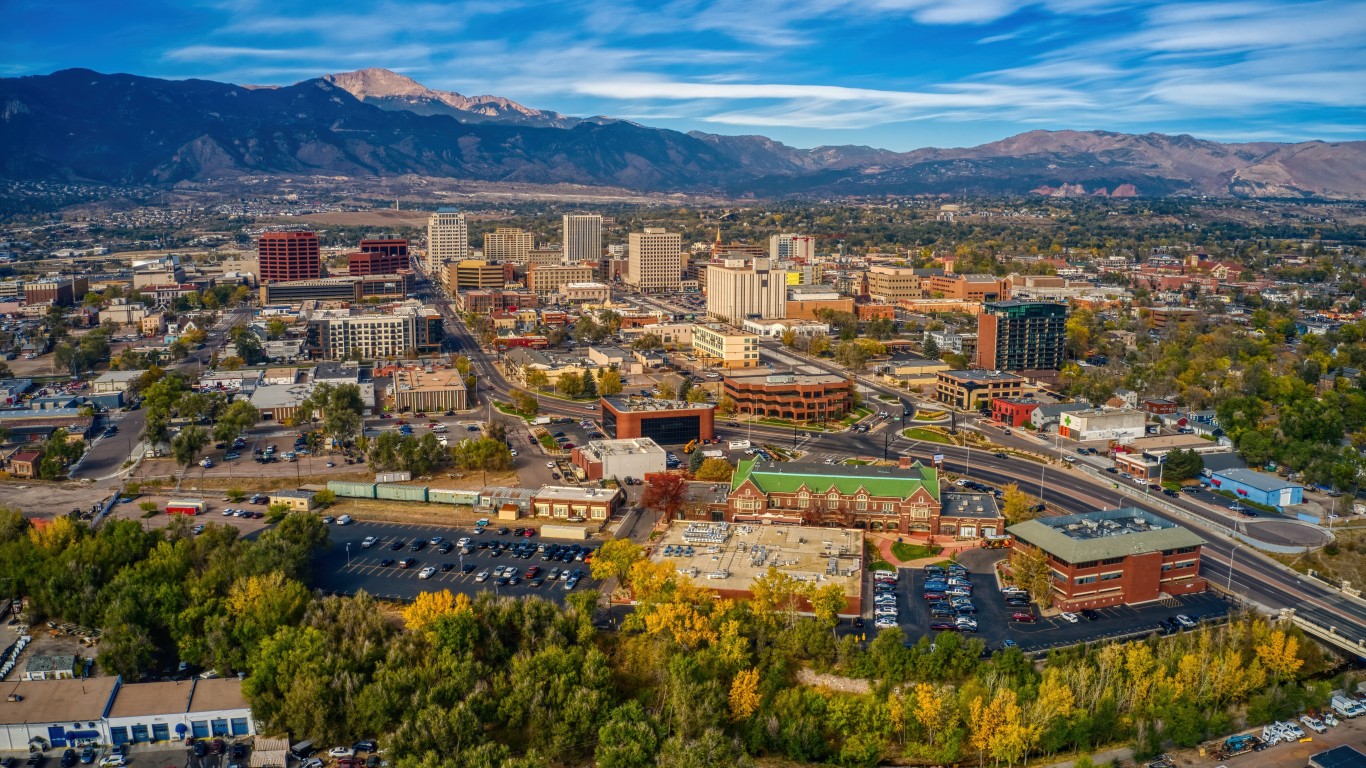 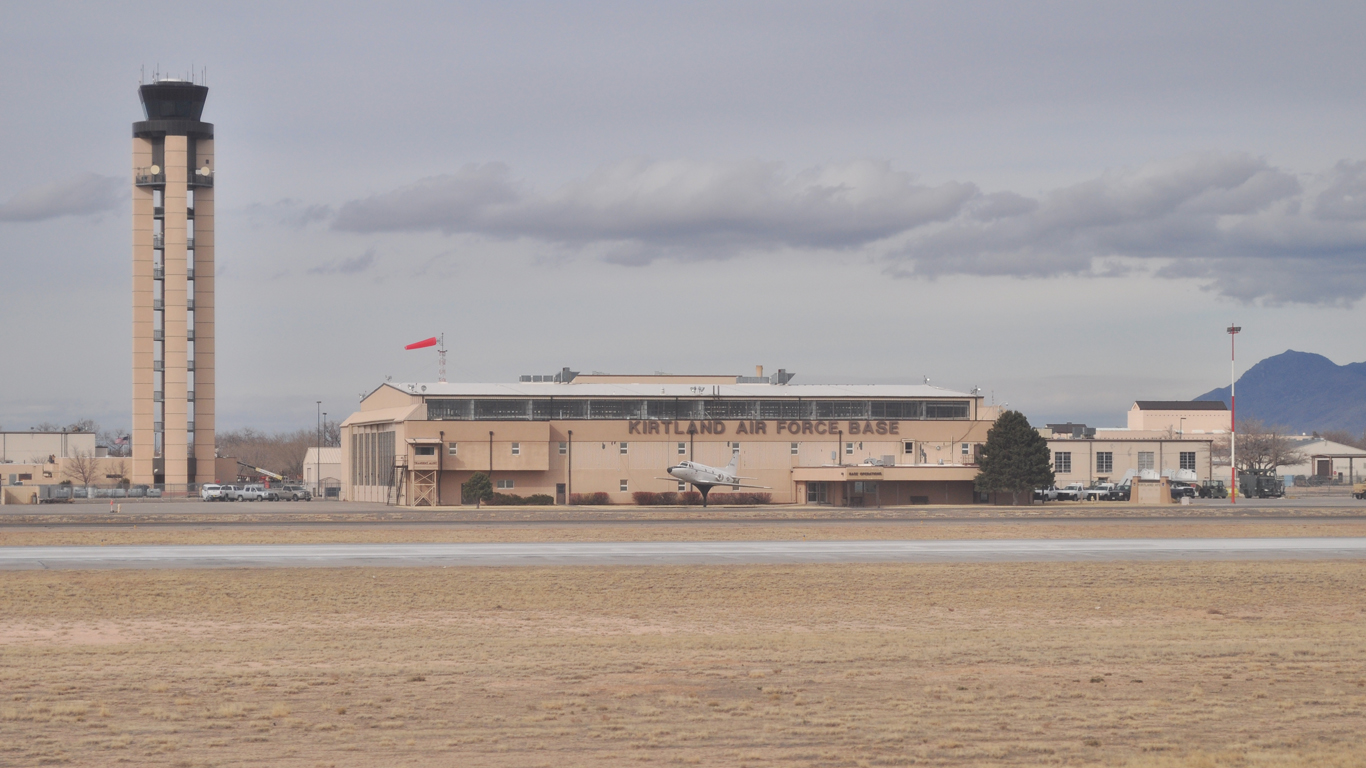 Kirtland Air Force Base occupies a majority of southeast Albuquerque. The base is the headquarters of the Air Force Global Strike Command’s largest installation, the Air Force Nuclear Weapons Center. The center, within Air Force Materiel Command, is charged with synchronizing all aspects of nuclear materiel management, including storing and transporting nuclear weapons. 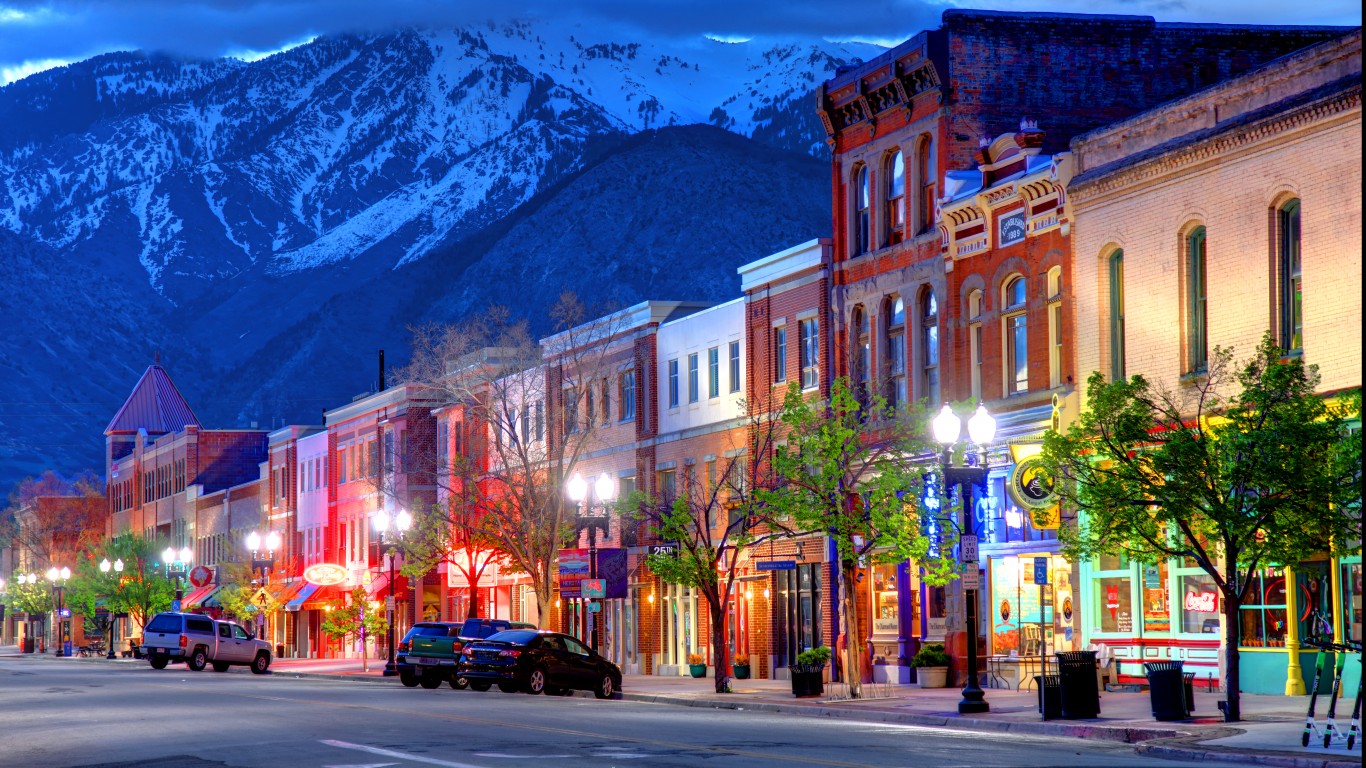 Hill Air Force Base is an Air Force Materiel Command base located between Ogden and Clearfield. It is the Air Force’s second largest base by population and geographical size and provides installation support for the Air Force Nuclear Weapons Center, headquartered in Kirtland AFB (No. 11), including storing and transporting nuclear weapons. 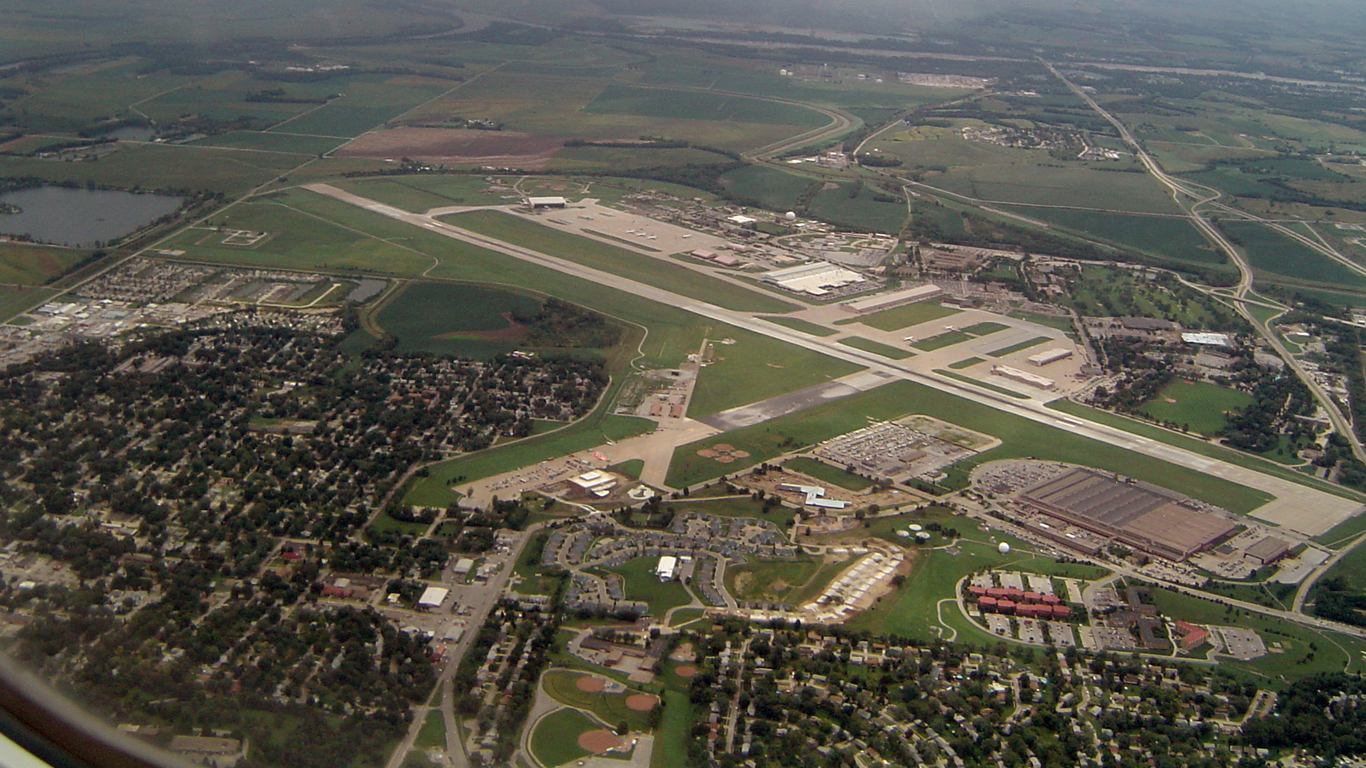 Offutt Air Force Base, just south of Omaha, is the headquarters of the U.S. Strategic Command, which coordinates the necessary command and control capability to provide support for the president, the secretary of defense, other national leadership and combatant commanders.

In the terrorist attacks on Sept. 11, 2001, President George W. Bush, who was in Florida at the time they struck, was first flown to Barksdale AFB (No. 15), then to Offutt, where he was taken into an underground command center bunker designed to withstand a nuclear blast and as a place from which a presidential order to go to nuclear war could be issued. There he held an hours-long teleconference with his senior cabinet staff, the CIA, Pentagon, and FBI, among others. 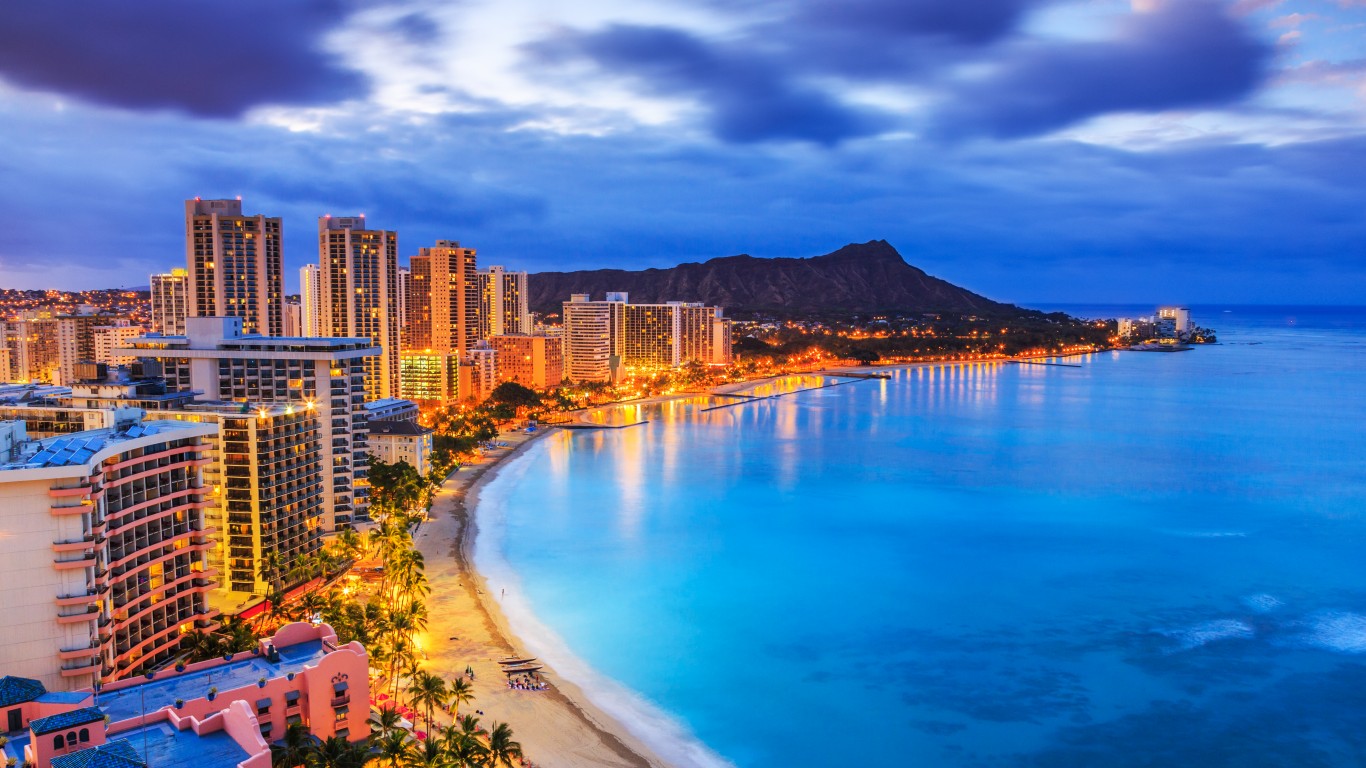 The U.S. Navy’s VLF transmitter Lualualei is a facility that transmits orders to submerged submarines in the very low frequency range. Such capability would be needed if the U.S. wanted to launch a submarine attack. Another such submarine communication site is in Cutler, Maine, which is too far from major urban centers to be included on this list. Though a direct hit over the transmitter might not reach Honolulu, evacuation possibilities from the island are limited. O’ahu is home to several other military bases, including Pearl Harbor, which was infamously attacked by the Japanese in 1941. 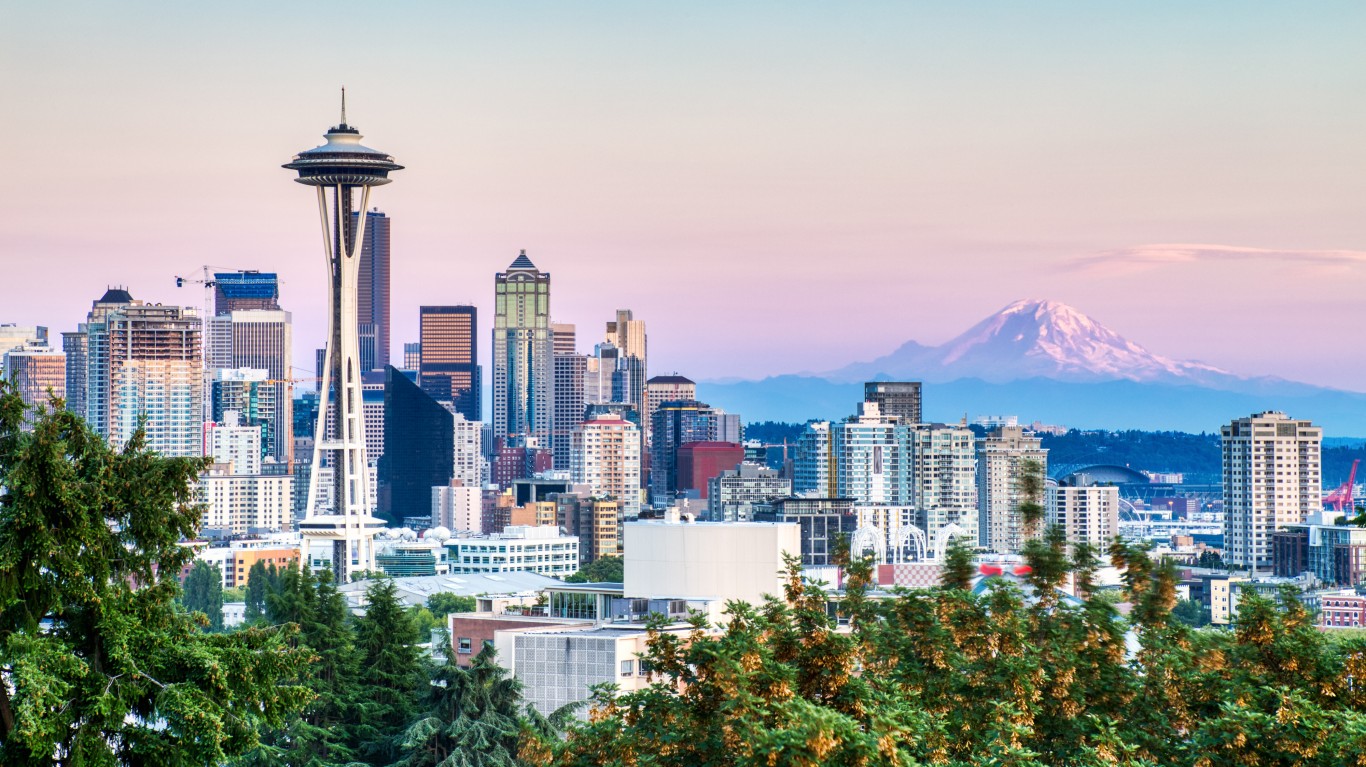 Though not situated too close to any one strategic target, Seattle is located between two highly likely targets, and given its geography and population density, evacuation may not be easy.

Naval Base Kitsap, a strategic nuclear weapons facility, is home to all types of submarines, including the UGM-133A Trident II-armed submarines (Trident II is a submarine-launched ballistic missile) and two Nimitz-class aircraft carriers. The somewhat remote Naval Radio Station Jim Creek is another VLF transmitter for the Pacific submarine fleet. In 2019, Russian state television listed it among U.S. military facilities that would be likely targets in the event of a nuclear strike. 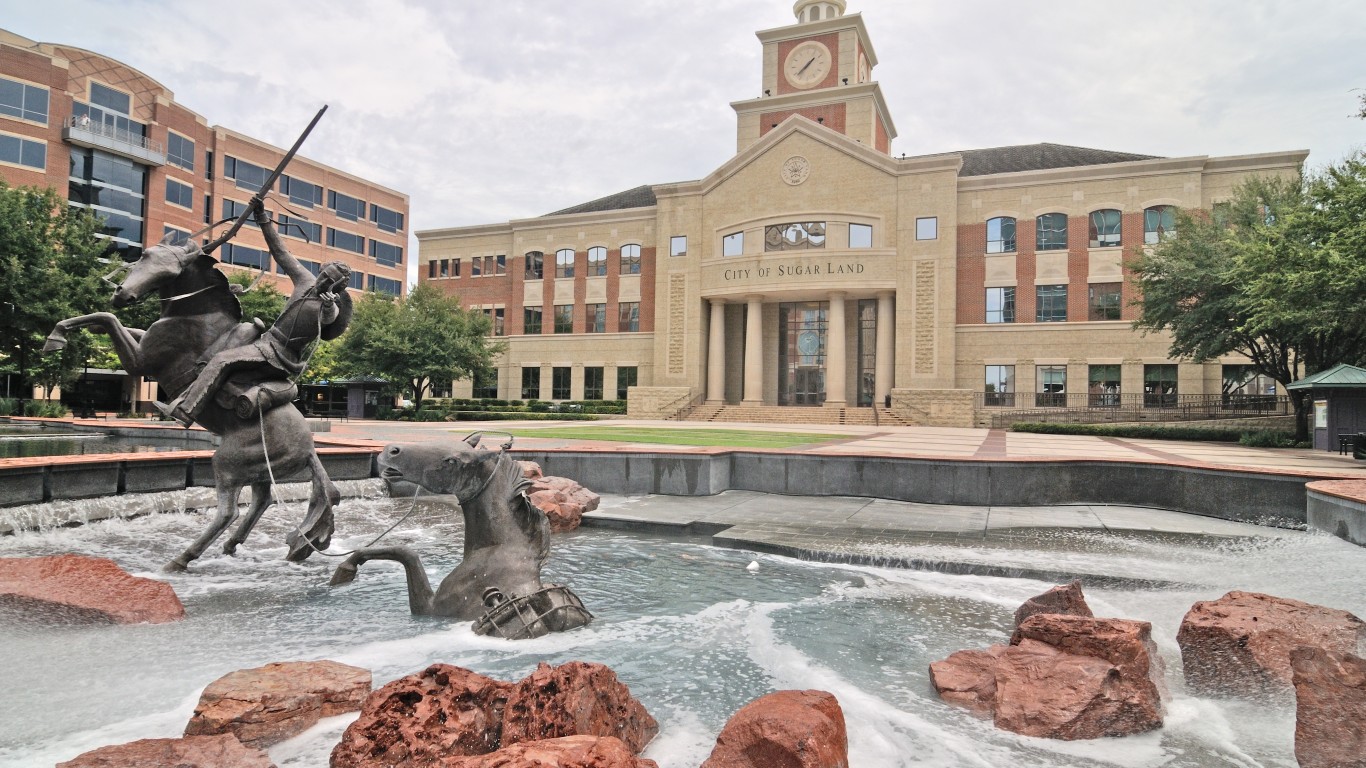 Houston is one of the six cities evaluated as likely civilian targets in the event of a nuclear attack on America. Of the six, it has the lowest population density. The city’s health department specifically mentions radiological incidents in its emergency preparedness plan. The closest nuclear power plant, South Texas Project Nuclear Generating Station, is about 65 miles away from the metro area’s outskirts. 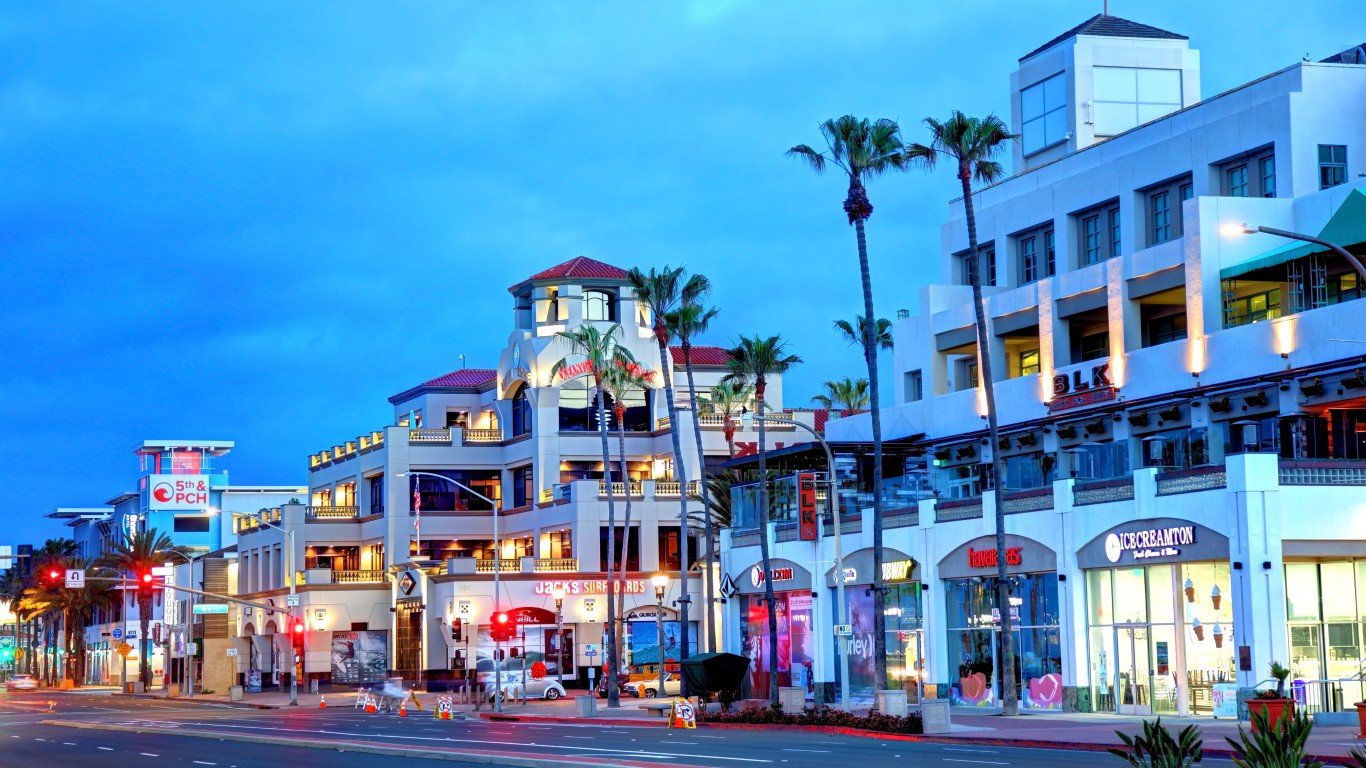 Crippling the U.S. economy and dealing a blow to American institutions, including cultural ones, would be the reason for attacking civilian targets. Los Angeles certainly checks both boxes as the second largest metro economy. While the city may not be as densely populated as other cities on the list, it is highly congested. The city’s Emergency Management Department specifically has a plan for a nuclear incident. 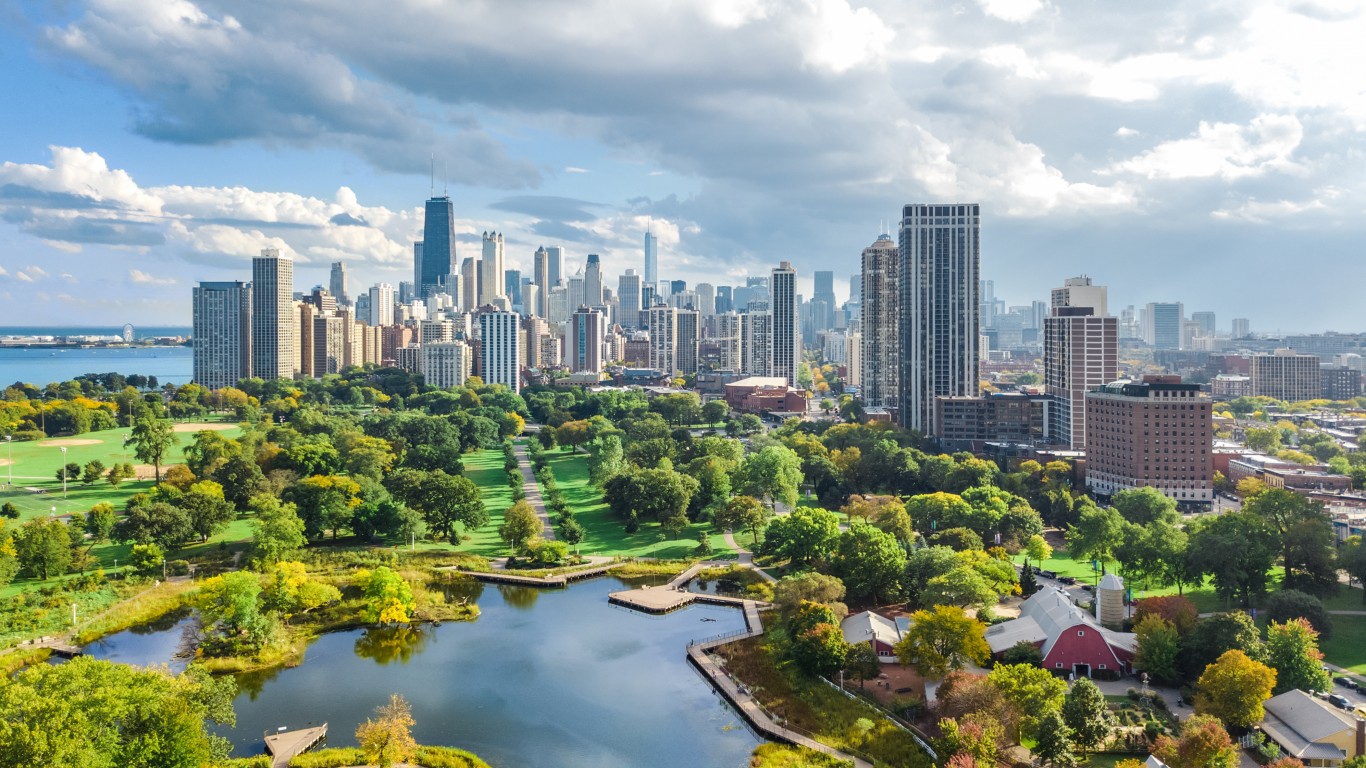 With four nuclear power plants within 50 miles of the city – the nearest not 20 miles away – Chicago is another possible civilian target. If these power plants are hit in addition to the city in a nuclear attack, it could exacerbate conditions in Chicago. Any attack on O’Hare International Airport, the world’s fourth largest, would severely cripple travel in North America. The city has the third highest GDP of any U.S. metro area after New York and Los Angeles, so its destruction or evacuation would have a major effect on the national economy. 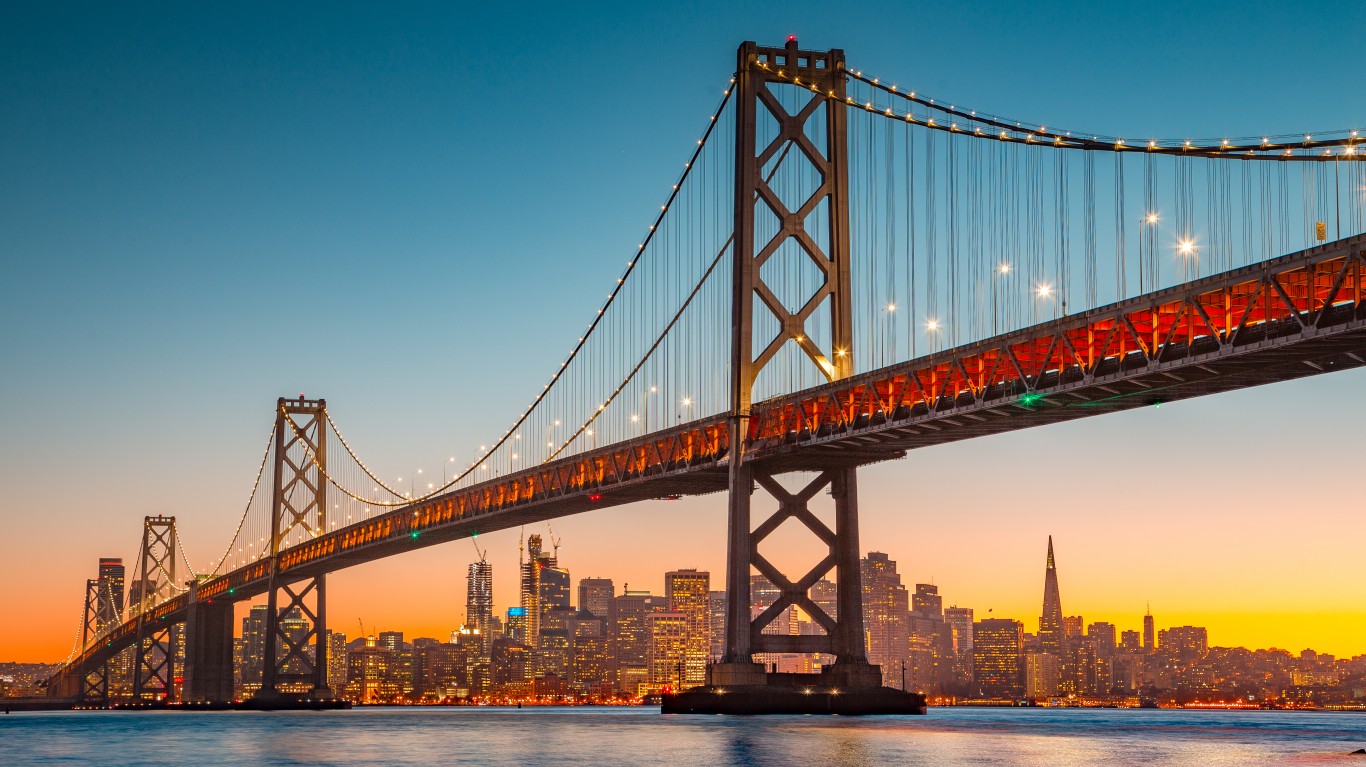 San Francisco is located at the north end of the San Francisco Peninsula, surrounded by the Pacific Ocean and San Francisco Bay, making evacuation extremely difficult. The fourth largest metro economy in the U.S., San Francisco is also home to the expanded Silicon Valley that originated further south in the San Jose area. Though the city has a plan for emergency, it does not mention radiological or nuclear incidents. 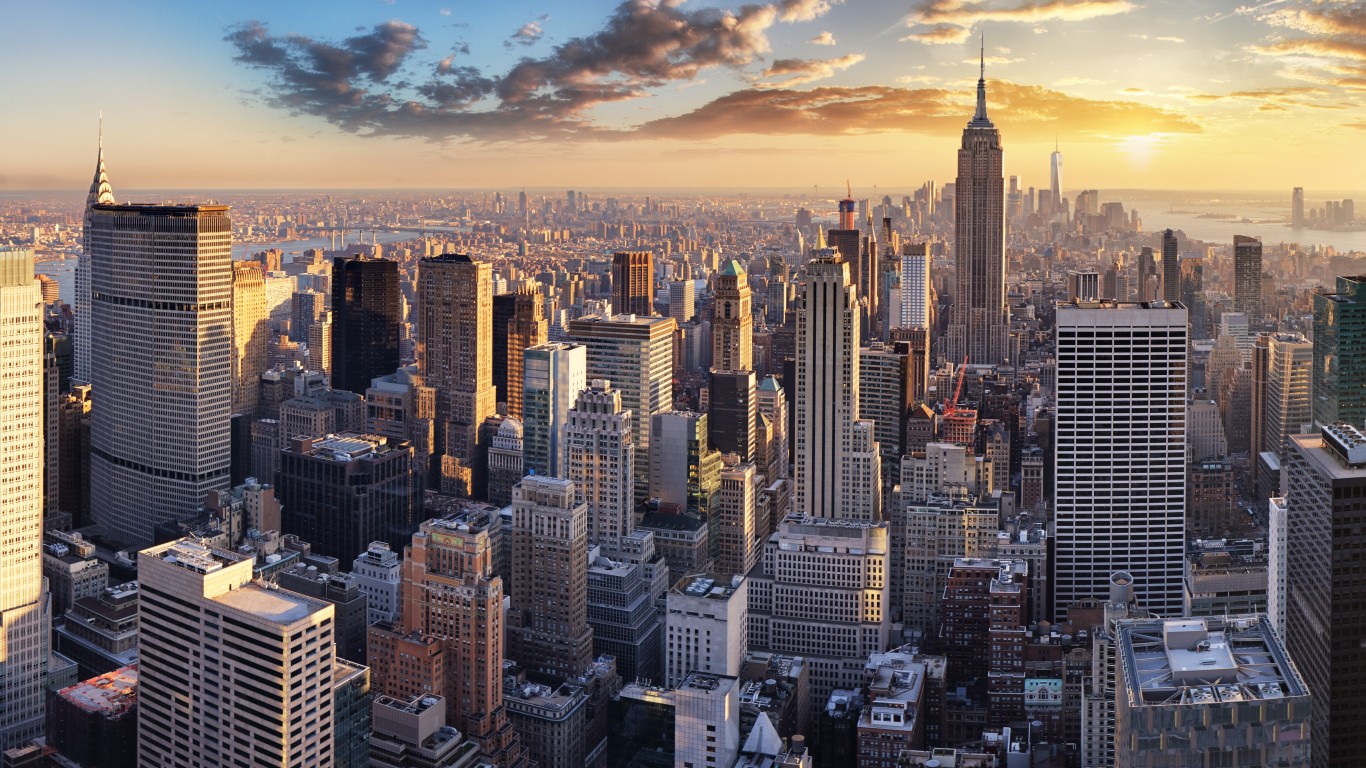 The U.S.’s largest metro economy and the most densely populated metro area, New York City is a highly likely civilian target. Home to Wall Street, the city was already the target of several terrorist attacks, including the 9/11 attacks that crippled the city for days. The New York Stock Exchange closed for four days, its longest shutdown since 1933. Perhaps as a result, the city is far more prepared than most. Still, evacuating from Manhattan has proven to be very difficult. 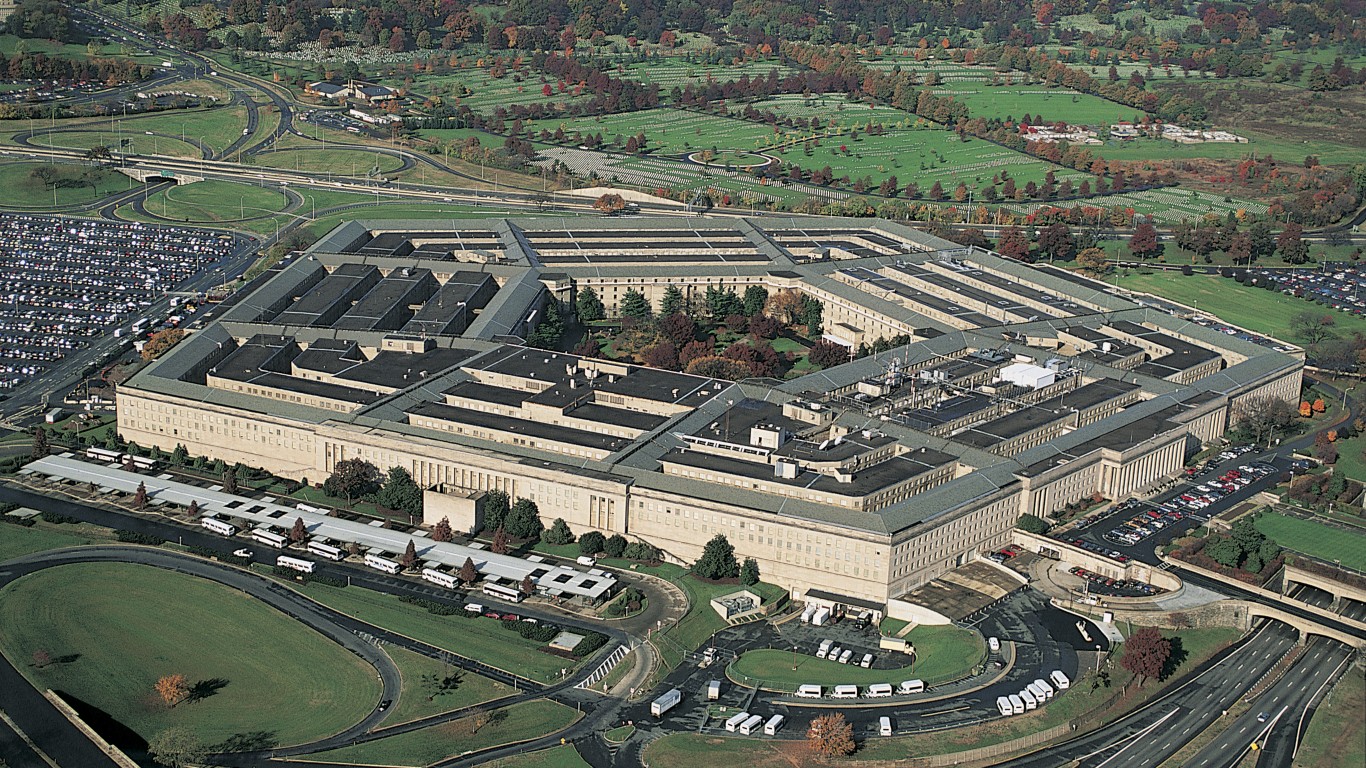 The nation’s capital has more than one highly valued target, not the least of which is the Pentagon, the headquarters of the U.S. Department of Defense, which was already a target of the terrorist attacks on 9/11. The seats of the executive branch (the White House) and the legislative branch (Congress) are also highly likely to be attacked along with such targets as the nearby CIA headquarters. About 30 miles southeast of the metro’s outskirts is the Calvert Cliffs Nuclear Power Plant, and about 60 miles southwest is North Anna’s Nuclear Generating Station.

To find the worst cities to be in the event of a nuclear attack on America, 24/7 Wall St. constructed an index consisting of several measures. The first important measure was the likelihood a city would be bombed. Dr. Irwin Redlener, a professor at Columbia University’s Mailman School of Public Health, identified six economic centers most likely to be attacked. In addition, Business Insider mapped the 15 strategic military targets Stephen Schwartz identified in his books as most likely to be attacked first to neutralize the U.S. nuclear capabilities. These targets include command centers, ICBM bases, and air force and submarine bases, many of which are within close proximity to large urban centers.

Four strategic targets are too far from large urban centers to be included: Minot AFB in North Dakota, Naval Computer and Telecommunications Station Cutler in Maine, Whiteman AFB in Missouri, and Kings Bay Naval Submarine Base in Georgia.

We have ranked all the likely targets based on city population density, within the city proper and the larger metropolitan area (from the U.S. Census Bureau 2020 American Community Survey); city preparedness for emergency (from city or state websites), economic significance based on 2021 gross domestic product (half weight) from the Bureau of Economic Analysis; air distance in miles to the strategic military target using Google Maps; and ease of evacuation. This last measure uses commute time given by the ACS as a proxy to congestion and the percentage of a city area that is water.

We also added projected fatalities and injuries assuming center city detonation or detonation over the strategic location using Nukemap. We used a 1 megaton bomb, which has a light blast damage radius (1 psi) of 19.8 km or 12.3 miles for a total of 1,230 km squared, or 475 miles squared.