Alan Greenspan; Gresham’s Law and why the US dollar is so strong 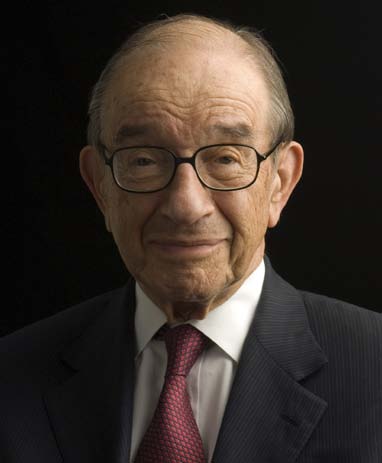 I just came across this insightful blog post regarding Gresham’s law and how it currently applies to the US dollar. Interestingly enough it was written by Alan Greenspan, former Federal Reserve Chairman.

I thought it would be proper to devote a separate blog post to Dr. Greenspan’s thoughts regarding Gresham’s law and the dollar, because I have received a couple of recent emails asking me to explain why I thought the US dollar was in such high demand. Moreover, a commenter on a recent post asked why I thought certain fiat currencies wouldn’t “collapse”. Greenspan’s ideas go a long way in explaining my sentiment.

Gresham’s law is a monetary principle named after Sir Thomas Gresham. It is colloquially simplified to “bad money drives out good”.

Further down in the article, Greenspan explains how Gresham’s law can also apply to fiat currencies.

When the U.S. dollar was first anointed the world’s reserve currency by the Bretton Woods Agreement in 1944, it was fully backed by gold. Now that the global financial system has transitioned fully to fiat currencies, examples of Gresham’s law in its traditional formulation are rare. No longer are there difference in intrinsic (commodity) value causing one currency to be favored over another. However, foreign exchange rates do reflect some of the forces Gresham originally recognized at work. The present strength in the U.S. dollar in relation to the other traditional reserve currencies is one example of market participants choosing to hoard what they view as “good money” – or at least better money.

Below, I am going to include the entire unedited text of Alan Greenspan’s blog post, because I believe it provides a very succinct explanation of why I have found the dollar to be the currency of choice over all other fiat currencies. Keep in mind, my conclusions on why the dollar is king only applies to the Post-QE world. I would not be able to make these same assumptions before the advent of QE in 2008.

I also see other reasons as to why the dollar is remaining firm. Two other forces that I can think of are also at play; first, the United States is the world’s largest energy producer, and given the current geopolitical state of affairs, the US is seeing great demand for its energy products. Second, in the post-QE world, the world is consuming much more credit than the world could typically service, and with the dollar as the de facto reserve, any economic and financial stress would impose a premium on the greenback as borrowers chase to obtain the needed dollars to service outstanding debt. In other words, any financial stress magnifies the value of the dollar.

Gresham’s law is a monetary principle named after Sir Thomas Gresham. It is colloquially simplified to “bad money drives out good”. This was the jest of the argument Sir Gresham presented to Queen Elizabeth I to explain the poor state of England’s coinage following the “Great Debasement” under King Henry VIII. During this period, the purity of gold and silver coins produced by the English mint steadily declined by order of the Crown in an attempt to increase revenues. Once the lower purity of the new (bad) coins was discovered, the old (good) coins of higher purity disappeared from circulation as people chose to spend the lower quality coins in market transactions and hoard the higher quality coins as a store of value – bad money had driven out the good. By the time Queen Elizabeth I ascended to the throne, the secret was out and even foreign merchants were refusing to accept payment in the debased currency.

A similar response to currency debasement was observed in the United States some four hundred years later. In response to a shortage of coins coupled with depleted government silver stocks, the Coinage Act of 1965 reduced the silver content of the U.S. half-dollar coin from 90% to 40%. In accordance with Gresham’s law, the higher purity coins quickly disappeared from circulation. Furthermore, when the price of silver subsequently reached a level at which the silver content in the 40% coin was worth more than their nominal 50-cent face value, those coins disappeared from circulation as well and the U.S. mint abandoned including any silver in half-dollar coins shortly thereafter. Even the lower quality 40% half-dollars had been driven out by worse money – Federal Reserve Notes.

When the U.S. dollar was first anointed the world’s reserve currency by the Bretton Woods Agreement in 1944, it was fully backed by gold. Now that the global financial system has transitioned fully to fiat currencies, examples of Gresham’s law in its traditional formulation are rare. No longer are there difference in intrinsic (commodity) value causing one currency to be favored over another. However, foreign exchange rates do reflect some of the forces Gresham originally recognized at work. The present strength in the U.S. dollar in relation to the other traditional reserve currencies is one example of market participants choosing to hoard what they view as “good money” – or at least better money.

Through the prism of Gresham’s law, the strength in the dollar is largely the result of drastically diverging monetary policies. The Federal Reserve has embarked on an expedited rate hike schedule, and this alone would tend to produce a strengthening in the dollar. However, the Fed’s actions are even more dramatic when you look at what the central banks of the other reserve currencies are doing. The Bank of Japan has committed to maintaining ultra-low rates – their target short-term rate is negative at the moment and the target rate on their 10yr bonds is 0%. Europe is also behind the U.S. with respect to the tightening cycle having just brought their target rate to neutral in July and now sitting at a meager 1.5%. By comparison, the Federal Reserve is expected to raise their target rate to 4% at this week’s meeting of the Federal Open Market Committee (FOMC). The Federal Reserve’s commitment to tamping down inflation has convinced markets that the value of their dollar holdings will not be inflated away as quickly as compared to these other reserve currencies and U.S. dollar strength is a symptom of market participants choosing to hoard the “good money”.

Even if, as some prognosticators expect, U.S. inflation crests in the first half of 2023 and the Federal Reserve can slow or even stop the pace of rate increases, the U.S. dollar will still have a monetary tailwind to support it. Indeed, the elephant in the room with respect to continued strength in the U.S. dollar going forward may turn out to be the $95 billion per month reduction in the Federal Reserve’s balance sheet. By contrast, the European Central Bank (ECB), who also has a near-$9 trillion balance sheet, recently indicated it has no plans to begin reducing its holdings. Meanwhile in London, former prime minister Liz Truss’ belated fiscal plan shocked markets so much that the Bank of England had to step in and buy government bonds to preserve financial market stability – they are essentially engaging in quantitative easing as the U.S. is tightening. The fact that the supply of U.S. dollars can be expected to steadily decrease makes it a better store of value – that the pound sterling and euro are both flirting with dollar parity is a clear example of investors dumping “bad money”.

To be sure, other factors are also at play. War in Ukraine and the massive uncertainty that it continues to generate in energy and other commodity markets, not to mention geopolitics, is supportive of a the safe-haven dollar. But even if this exogenous shock were to be resolved, the divergences in monetary policy would cause dollar strength to persist for some time. Furthermore, investors should be aware that while dollar strength can be a symptom of economic stresses, it can also be a cause. As the global reserve currency, many of the world’s most important commodities are priced in dollars – in particular energy. Strength in the dollar has made the natural gas Europe so desperately needs that much more expensive. Emerging market economies that rely on imports of dollar-denominated commodities or hold dollar-denominated debt would experience an influx of inflation coupled with rising debt service costs. Absent price increases in their foreign markets, U.S. multinational corporations would experience deflated overseas earnings as the dollar value of foreign sales would shrink with a rising dollar. Take heed, Gresham’s law can wreak havoc on currencies, and the underlying economies will eventually feel the consequences.

53 thoughts on “Alan Greenspan; Gresham’s Law and why the US dollar is so strong”