However, that remains lower than the $51 per barrel required in the first quarter of 2020, “providing enough cushion to boost the production levels amid higher oil prices.”

Analysts say listed shale producers are earning so much cash — and equity valuations remain so discounted after years of investor flight — that share buybacks could eventually take some of them private.

“If investors don’t return to the space, companies will slowly but surely privatize the entire capital stock.”

According to the U.S. Energy Information Administration (EIA);

The United States has been increasing its oil production over the past 12 months, and has continued to move further away from the second place producer, Russia 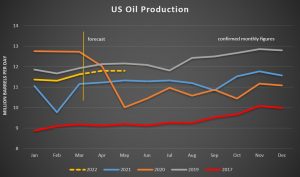 Top 10 Countries with the Highest Oil Production (barrels per day)

Top 10 Countries that Produce the Most Natural Gas (Cubic Meters, 2020):

Russia may have more proven reserves than the United States, but Russia’s inefficiencies show. The phony fall of the Soviet Union allowed for Russia to receive a great transfer of Western technology devoted to building up Russia’s oil and gas production sector. While the United States ostensibly has lower proven reserves, the E&P sector continues to locate more reserves on a consistent basis. Moreover, many oil and gas wells replenish themselves spontaneously over time, which essentially refutes the misguided notion that hydrocarbon energy is a “fossil” fuel; rather it supports the concept that gas and oil are produced abiotically.