A response to an email; Never rely on others who do not have your best interests in mind

Ray Dalio has another agenda, and we are not part of it; While he warned of calamity, we went bullish

Jim Cramer on Tuesday warned viewers about the risks of relying on other people’s advice to invest in the stock market.

The “Mad Money” host suggests understanding your own investing goals and priorities before deciding to follow the lead of a big-time money manager, pointing to the bearish outlook and “terrifying statements” Bridgewater Associates founder Ray Dalio offered in January.

The renowned hedge fund manager’s then-assessments on politics, the economic cycle and Federal Reserve’s moves in monetary policy “was scary stuff that made you want to sell everything,” Cramer said. Nobody’s perfect and even the top investors often get it wrong.

“As it turns out, though, that would’ve been a great time not to sell but to buy. And when you look at Dalio’s flagship fund at Bridgewater, its performance in the first half was reportedly down 4.9% …,” he said. “And that’s fine for him: he’s already one of the richest men in the world, he will not miss it.”

Beware of the disingenuous shill

You read his motives correctly.

Here was my response (edited for grammar): 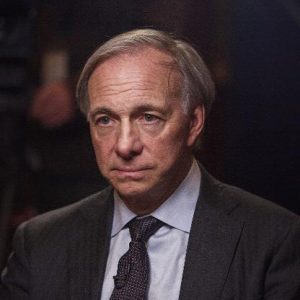 I think I understand why Dalio speaks Western calamity all the time. I think it jibes well with the people with whom he wants to curry favor (e.g. ChiComms).

It is amazing how many in the alt-financial press are playing up how China will rule over the financial world. They talk up a regime that killed at least 100mm during their ChiComm purge and who do not tolerate true Christianity or Islam. They look for anything other than the dollar.

Here is my observation of China taking over the world. They will never rule over more than their direct sphere in Asia. If this plays out, we will have spheres of influence like in Orwell’s 1984; three super-regions duking it out.

If people think the U.S. cannot be trusted, ChiComm puts them to shame. The Muslim nations will only take their money, but will only view China as a counterbalance to the Anglo/American establishment. I think most nations are downright scared of ChiComm and what they are capable of doing.

[The globalists can try all they want to rewrite history and portray China as a benevolent dictatorship, a centrally-planned economic miracle, and the future financial go-to, but that can never change reality. The West propped up and promoted this brutal Communist dictatorship after WW II, and the globalists picked China to be the manufacturing powerhouse before Kissinger visited China in 1971.]

[In order to get the next phases of the new world order implemented, the globalists knew that monetary printing would go into hyper-drive post 1971, and thus chose to offshore production to low cost nations. China was the direct beneficiary. If it weren’t for this decision, China would be in a much more inferior position today.]

I can figure out how the western governments work. They are broken socialist states, and are propped up with central bank intervention. It actually is straightforward. Good luck figuring out how China’s financial system works. It’s a centrally managed mess that only benefits the well-connected.

Besides, the global, privately-run central banking monetary system was developed by Western nations and the Anglo-American/European powers. All the nations are operating within a Western construct. China, Russia, Asia, India, Africa, etc. all operate within an Anglo/American/European system. What will happen when China gets the power that its rah rah shills are saying? Perhaps China will not operate within the system anymore, but the Western nations will never operate with whatever China proffers.

China doesn’t trust the United States and the U.S. doesn’t trust China. It’s in the DNA and this will never change. The two systems, while merging into a Socialist/Communist hybrid will never reconcile. The Martin Armstrong’s of the world are just hoping for societal and economic collapse in the West, so they can be vindicated.