The “Bernanke doctrine” – What seemed extraordinary in 2002 is routine today

Ben Bernanke was chosen as Fed Chair, because his advanced grasp of the unconventional was ahead of his time Note to reader: The preservation and perpetuation of the Federal Reserve and the private central banking cartel is the primary objective of the elites. By the early 2000’s, it became clearly evident that under its normal routine of operation, the existing monetary system was reaching its denouement. The elites knew that unconventional actions and policies would need to be promulgated to move the existing monetary system forward. With his vast understanding of the unconventional, I have to conclude that Ben Bernanke was specifically chosen at the time to not only transform the Federal Reserve’s operations and policies, but to help frame the entire global central banking system for decades to come. There was no other candidate with the in-depth knowledge, and no other Fed Chair has had the capabilities that Mr. Bernanke possessed. We need to comprehend that Bernanke’s role was to preserve the existing hierarchy, and while those on the outside view his tenure as a disaster, I view it as a success.

I received an email from a reader:

Have you heard of the Bernanke doctrine?

Indeed, I have… On November 21, 2002, then Federal Reserve Governor, Ben Bernanke, delivered a speech before the National Economists Club in Washington, D.C. The speech was titled Deflation: Making Sure “It” Doesn’t Happen Here, and you can still read the transcript of this now-famous speech on the Federal Reserve’s website. At first, the speech did not receive much publicity, but it helped to quantify what would eventually be known as the “Bernanke doctrine.”

In 2005, this 2002 speech received renewed interest when President George W. Bush selected Bernanke as the chairman of the Council of Economic Advisers. After several months of grooming, President Bush nominated him for Federal Reserve Chairman. Ben Bernanke was sworn in as Fed Chair early 2006. This gave him time to prepare for what was coming – the manufactured crisis that would work to transform the entire central banking system. This auspiciously timed crisis provided the opportunity for Mr. Bernanke to spin his magic.

Here is an excerpt from his 2002 speech;

So what then might the Fed do if its target interest rate, the overnight federal funds rate, fell to zero? One relatively straightforward extension of current procedures would be to try to stimulate spending by lowering rates further out along the Treasury term structure–that is, rates on government bonds of longer maturities. There are at least two ways of bringing down longer-term rates, which are complementary and could be employed separately or in combination.

One approach, similar to an action taken in the past couple of years by the Bank of Japan, would be for the Fed to commit to holding the overnight rate at zero for some specified period. Because long-term interest rates represent averages of current and expected future short-term rates, plus a term premium, a commitment to keep short-term rates at zero for some time–if it were credible–would induce a decline in longer-term rates.

A more direct method, which I personally prefer, would be for the Fed to begin announcing explicit ceilings for yields on longer-maturity Treasury debt (say, bonds maturing within the next two years). The Fed could enforce these interest-rate ceilings by committing to make unlimited purchases of securities up to two years from maturity at prices consistent with the targeted yields. If this program were successful, not only would yields on medium-term Treasury securities fall, but (because of links operating through expectations of future interest rates) yields on longer-term public and private debt (such as mortgages) would likely fall as well.

Lower rates over the maturity spectrum of public and private securities should strengthen aggregate demand in the usual ways and thus help to end deflation. Of course, if operating in relatively short-dated Treasury debt proved insufficient, the Fed could also attempt to cap yields of Treasury securities at still longer maturities, say three to six years. Yet another option would be for the Fed to use its existing authority to operate in the markets for agency debt (for example, mortgage-backed securities issued by Ginnie Mae, the Government National Mortgage Association).

The seven tenets of the Bernanke doctrine

According to Wikipedia (which was just an edit of Bernanke’s 2002 NEC speech), to combat deflation, Bernanke provided a prescription for the Federal Reserve to prevent it. He identified seven specific measures that the Fed can use to prevent deflation.

“The US government has a technology, called a printing press, that allows it to produce as many dollars as it wishes at essentially no cost.” “Under a paper-money system, a determined government can always generate higher spending and, hence, positive inflation.”

2) Ensure liquidity makes its way into the financial system through a variety of measures.

“The U.S. government is not going to print money and distribute it willy-nilly …”although there are policies that approximate this behavior.”[1]

3) Lower interest rates – all the way down to 0 per cent.

6) Execute a de facto depreciation by buying foreign currencies on a massive scale.

7) Buy industries throughout the U.S. economy with “newly created money”. 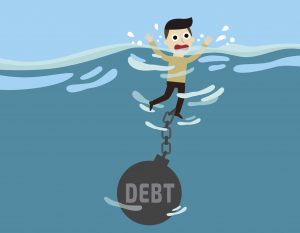 Although central bank sovereign debt purchasing is deflationary, by nature, it will not actually cause deflation. Rather, the highly inflationary conditions that normally prevail under perpetual sovereign debt creation and currency debasement are tempered by the deflationary forces that are caused by the growing debt servicing costs. The more debt that is outstanding, the more of a deflationary effect it has on  the economy. As long as government default risk is removed from the equation, there is little reason to experience the inflationary conditions that a loss of confidence would engender. As the amount of outstanding debt balloons past normal GDP measures; if the central banks can maintain low interest rates (as Bernanke theorized), the monetary system can be maintained.

As long as the central banks stand ready to buy up assets as needed to keep interest rates low, the higher asset prices will rise and the lower the general level of price inflation the economy will experience.

With Mr. Bernanke’s guidance, the elites have developed techniques to keep the national governments spending with reckless abandon, while keeping the general price level low.

Mr. Bernanke was ahead of his time in 2002. He set the guide path for future monetary policy and it was his through his unconventional mindset, specifically with respect to asset acquisition, that we now see negative interest rates in many areas of the world.  Future policies will now be set by what the elites can imagine.