The conditions in the U.S. are very favorable for continued increases in the major indexes 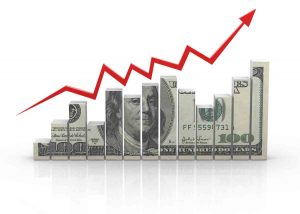 Note: This assessment is for a longer-term time horizon and not for the next few trading sessions.

It seems clear that the TPTB intend to keep the global economy and asset markets moving north. I have to conclude that this ongoing bull market in technology stocks, for instance, has been favorable to the advancement of the technology and AI that will be necessary for the new world order track and trace system. With this said, why would the elites collapse things now? Moreover, the monetary authorities have essentially accepted the responsibility (and taken the credit) for the ongoing bull market in most assets.

Okay. Now, let’s take a look at why I think the U.S. asset markets will continue to shine brighter than the rest of the G20 nations.

Here is a chart of the outlook for all the G20 GDP growth rates. Notice the U.S. on the bottom row.

The United States continues to move forward at a faster clip than the other major economies, especially with respect to the G7 nations.

The numbers that came out this morning confirm what we have been discussing all year. The United States is benefiting from the misery around the world. The U.S. Fed could be more hawkish, but has chosen the most expedient route. The Fed can afford to be more dovish than normal, because the rest of the developed world is fading and that has placed a lid on manufacturing inputs and commodity prices. Thus, the U.S. rate of inflation has been more subdued than what normally would be the case, given this stage in the recovery and employment situation.

Despite wage growth rising higher than the overall rate of inflation, especially the core CPI, prices have been tame and the average worker has been able to spend more. Average hourly earnings are up by 3.2% YOY. Inflation continues to remain below the Fed’s target, despite the  relatively robust economy. If this changes then my thesis will unravel. If inflation rises higher than desired, TPTB will have to let things fold, so they can keep rates low. This will allow the U.S. government to remain in business. But as of now, the U.S. is taking advantage of the world’s economic problems. It is making hay while the sun shines and this trend may last for a while.

Although interest rates in the U.S. are lower than what they should be, given the economic strength, they are still higher than elsewhere. Thus, the U.S. dollar will continue to find support here. This support will place a floor under the U.S. asset markets as global investors will hold domestic assets unhedged.

-The monetary authorities do not seem very concerned about asset bubbles

Last year, there was plenty of talk from the puppets about asset price inflation. But, in the wake of last December’s stock swoon, these conversations seem to be less prevalent. In fact, I observe that the politicians and economic advisers are gunning for higher stock prices. As long as inflation remains low here in the U.S. and interest rates remain low, but higher than elsewhere, the stock markets and other asset markets will continue to find support.

These relatively low rates will support real estate, especially in the middle sections of the market.

My take is that every day’s worth of domestic economic data confirm my ongoing thesis. I see no reason to step in front of this freight train.

It seems that the U.S. has had the groundwork laid for some very favorable conditions going forward.